Tonight I’m feeling – emotional, relieved, drained, frustrated, blessed, happy, nervous, anxious….you see I’ve been worrying about my little S since he was about 9 months old, and yet, it was only today at 36 months I got some answers.

And the thing is. I hate my kids being sick. I really, really hate it. I worry, ridiculously worry to the point that I fear the absolute worst, even though it’s ‘only an ear infection’. I panic about the high temperatures, the accelerated breathing.

I also have been worrying about S’s speech. If you follow me on Facebook, or are a regular reader of this blog, you will know that I have mentioned it a few times. From he was about 18 months I was concerned that he wasn’t saying as much as he should be. He was having difficulty imitating some of the animal sounds, like the snort of the pig and I was concerned. I rang my Health Visitor a couple of times about it and she said she would assess him at his 2 year review. She came and said that she didn’t have concerns about his speech and that it was what would be expected for a 2 year old boy. But I wasn’t convinced.  It wasn’t that I thought I knew better. I just felt there was more to it. So I pushed for her to refer us to a Speech and Language therapist.

We (finally!) got our appointment and when we went, she told me that S had the expected oral language of a 2 years 4 month old boy and his understanding of language was that of a 3 and a half year old.  I should say, that I had also been concerned about his drooling. I felt his drooling was excessive. He wasn’t teething anymore and yet he was still drooling –  a lot. She noticed his drooling and asked me about it. I told her I was concerned about his speech and this drooling and so she very kindly agreed to send us to an audiologist and she could test his hearing for me and see if there was fluid/congestion in his ear/nose/throat. But that she, as a speech and language therapist could see nothing wrong with his development and would not need to see him again.

I was so frustrated.

Anyhow, we waited another 4 months and got our appointment with the audiologist. Now, it did not go well. I’m not sure whether I am overly critical or maybe overly protective of my children, but the lady doing it had no real ‘skill’ with kids. She wanted to do some hearing test with S but he just wouldn’t do it. He was shy, a little afraid. She hadn’t even said hello to him or even said his name, so he was not for doing her game. Maybe it was his fault and he shouldn’t have been so awkward. But the 2 and a half-year old was shy and didn’t speak 1 word the whole appointment let alone talk for this woman. She was able to do the other test needed however and it confirmed that he did have fluid in both his ears, but until he complete the hearing test that she wanted she couldn’t refer him to ENT.

I cried the whole way home in the car that day.

As well as all of this, I was concerned about his apparent behaviour. The wee mite seemed angry a lot of the time. Frustrated. Like something was bothering him. I thought it was maybe because he couldn’t communicate his needs.  He shouted a lot. Cried a fair bit. Now I know that all kids can do that. But it was different. I knew there was more to it. He seemed genuinely upset sometimes. genuinely frustrated. He wasn’t being naughty. Something was up.

In March of this year I reached breaking point with it all. I knew in my heart that there was something more going on with my wee boy. I made an appointment with one of the ‘best’ doctors in our practice (he gets a good name – I think every practice has one!!). It was a 3 week wait to see him. In we went, I gave him a bit of background on S, told him I had self referred him to a speech therapist. The doctor said I had done all his work for him! (Am I a pushy mum??)

He took 1 look into S’s ears and said, “Oh, well, that’s completely abnormal. And so is that one”. He then went on to say, “Does he have trouble with words beginning with S, H or F?” To which i said, “YES!!!!!!! Yes he does”. He said, “Yeah he can’t hear them, they’re a high frequency sound and at the moment I would estimate that his hearing is reduced by at least 30% on both sides”. “Does he shout at you sometimes or scream?” “YES!” “Yeah, he doesn’t know he’s shouting”. His ears were packed with wax, a lot of fluid behind the ear drums and he thought there may have been a hole in one of his ear drums.  “I’m sure he can be quite frustrated at times as I would say he is in pain almost every day.”At which point I burst into tears.

“What’s wrong?” he asked. “I have been pleading and fighting with people since S was 9 months about his health and his speech and no one would listen”. He said, “Well, I’m referring to an ENT consultant at the Royal and we will get it sorted.”

So, today was our appointment. 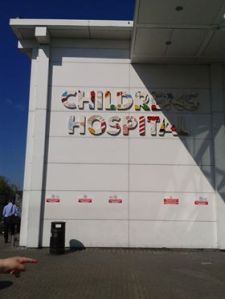 I was completely emotional this morning. Taking your child to the Royal Hospital is not something you ever want to have to do, no matter what you are taking them for. It brought back memories of our time there in January. I didn’t know what the Doctor was going to tell us would need to be done. When a Doctor tells you your child’s ears are “completely abnormal” you don’t know what to think. So off we went. 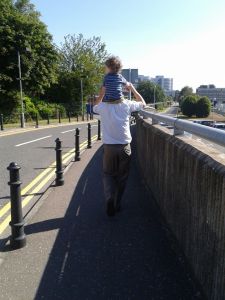 The good news is, that for now, the consultant will take out his adenoids and put in grometts and see how things go when that is done. That should happen within the next 3 months 🙂 Finally, we are getting somewhere. Finally I know, I’m not an over-anxious mother or,  “a typical teacher mum worrying about his speech”, as one of the professionals told me (!!!!!) Us mummy’s know our kiddies. We know when something isn’t just quite right. I don’t mean, by any means to belittle the work of Doctors or Health Visitors or Speech therapists. I just want to encourage any mothers out there, who have a little worry, or niggle about their child to keep on fighting for them. Keep on pushing. You just might be onto something.

Now all I have to worry about is the operation………. 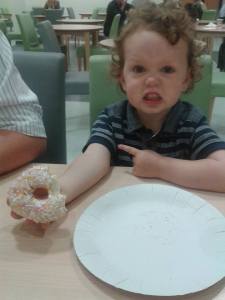 My very own Chandler 😉