For 8 years I was the teacher who welcomed the little ones at the door of school. I adored how cute they all were in their uniforms and their wee cutesie voices, some with wee lisps. Adorable. I had a little chuckle to myself, dare I say it, I may have even thought, “catch a grip”, at the mums who cried.  I expected the kids to be able to put their shoes on, socks on, jumpers on, why on earth would they not be able to do that, they were in school now???

I was the mummy who just about held it together as she said goodbye, but spent the next 3 hours counting down the minutes until I could go and ‘rescue’ him again.

He on the other hand loved it and can’t wait to go back tomorrow.

So, MY son has started school. MY little boy. He has taken that first little step of independence.  A giant step for me. He told me at lunch,  “I took a tumble today Mum. But I was ok, Mrs. C helped me feel better”. And he may as well have stabbed me with a knife!! (I know, a little dramatic!) But, for 4 and a half years I have been this little boys everything and I have to admit it hurts that someone else gets to share those wee moments now too.

But, hey, doesn’t he look handsome? 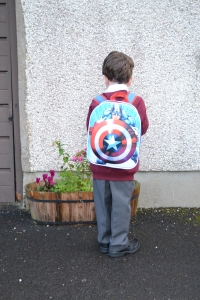 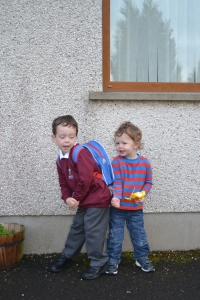 12 thoughts on “One small step for son, one giant leap for mummy!”