I realise I’m a little late in typing this up and you’ve all probably had enough of Christmas by now….BUT….I really wanted to make a wee post, for memories sake, of our trip to Santa Village at Mount Juliet in Kilkenny. It was just so wonderful and special and magical I can’t not share it with you.

Back in September I started looking around for somewhere to take the kids to see Santa.  For J’s first Christmas we went to Santa in Hilltown, which was amazing too, but I wanted to try somewhere different.  I kind of stumbled across The Santa Village in Kilkenny by accident. It looked and sounded amazing. Then, as luck (?!) would have it, a friend had posted on Facebook a wee snap of her and her husband on a wee trip to Mount Juliet. So I asked her opinion on it and she was so enthusiastic about her stay that I went ahead and booked it there and then!  We also celebrate our wedding anniversary on 23rd December, so I decided to combine the 2 occasions – we travelled down to Kilkenny on 23rd December, saw Santa that afternoon / evening and stayed overnight in THE MOST BEAUTIFUL ‘Rose Cottage’ at Mount Juliet that night.

Now, I have to confess I had never really considered how far away Kilkenny was, nor the fact that we would have to drive all the way home on Christmas Eve, but it all worked out absolutely fine and the journey actually was grand – hubster had made a fabulously fun Christmas CD which we really enjoyed singing along to – the kids are still asking for the funny, Christmas songs! Who doesn’t love Dominic the donkey or The Christmas Conga?! The combined with them all falling asleep for at least 1.5 hours of the journey meant that we were in Kilkenny before we knew it!

I also hadn’t really looked into the accommodation that much either, all I knew was that we were going to see Santa, there would be Elf school and a train journey and that was all that mattered!! Husband collected the key, a lovely man showed us to our cottage and as soon as I opened the door, I started to laugh!! Embarrassingly giggle uncontrollably – the man had no idea why and I couldn’t even explain. I was totally overwhelmed! The place was GORGEOUS. The photos will not even do it justice, but it was simply beautiful. What a surprise, what a treat!

I would highly recommend Mount Juliet and The Santa Village to anyone.  The people were so, so lovely. The accommodation luxurious. And Santa Village? Well, J, S and L actually thought we were in Lapland and that we have stayed in part of Santa’s house!

Here’s a few wee snaps from our trip, hope you enjoy 🙂

Here’s the living room, complete with our own Christmas tree and fire – it was a gas one, but a great gas one!! 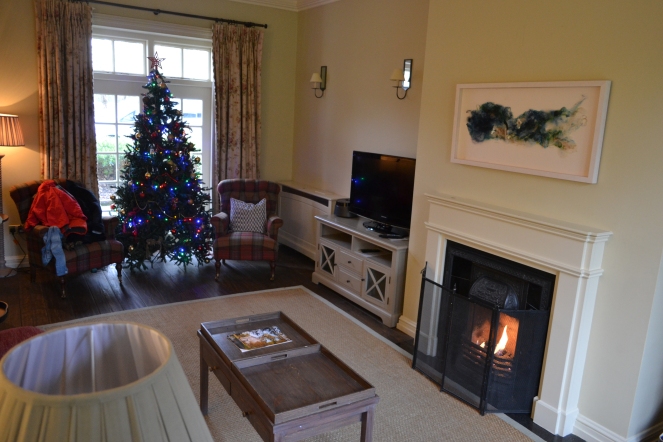 The dining area, which was all large glass windows – gorgeous views! 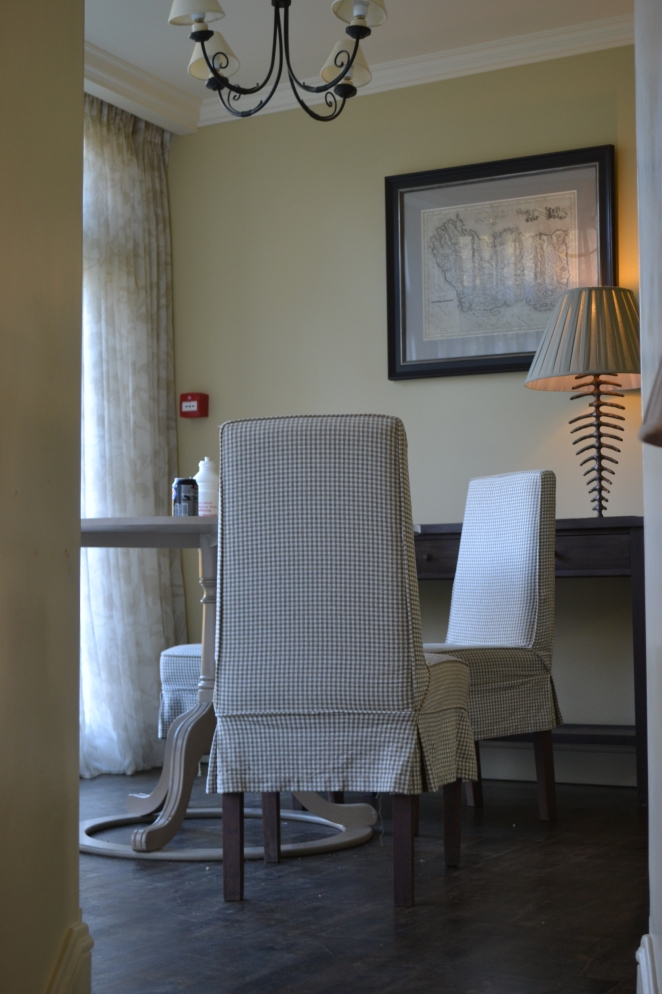 There was a great kitchen which had everything you would ever need.

This was our bedroom, it had an  en suite bathroom /shower room, large flat screen TV…..the biggest bed I’ve ever seen! I’m not sure if you can tell from this picture, but seriously it was huge!

The kids could not cope with the excitement of their room.  They had their own en suite bathroom, huge beds and a huge TV!

(As you can see Emily, Leonardo and Olaf came too!)

We had a little time to relax in our new home before heading to Elf school. J, S and L were given special passports, had to work out their Elf name, went into Mrs. Claus’ kitchen, learnt some Elf facts and then travelled to Santa’s house. 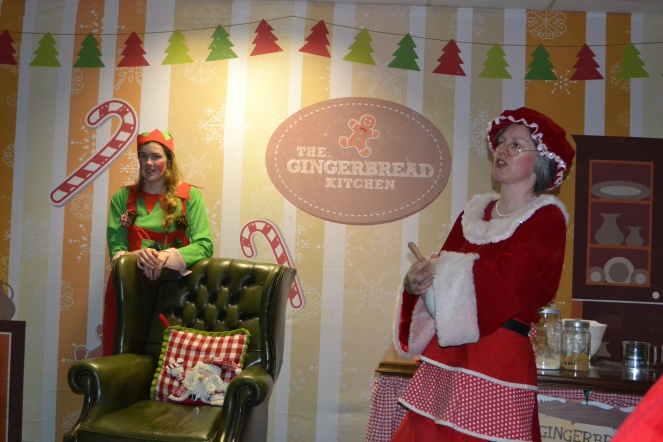 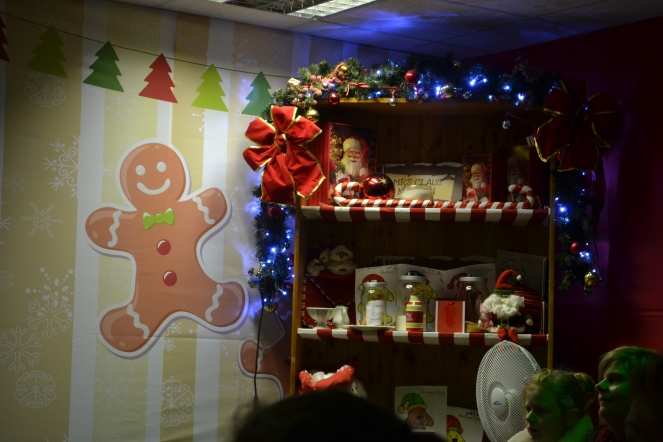 An elf came on the train with us, pointing our various Elf homes along the way, we all sang carols and saw where the reindeer sleep. 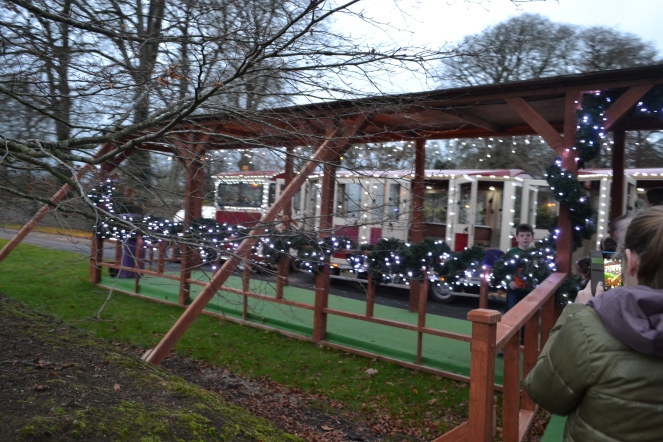 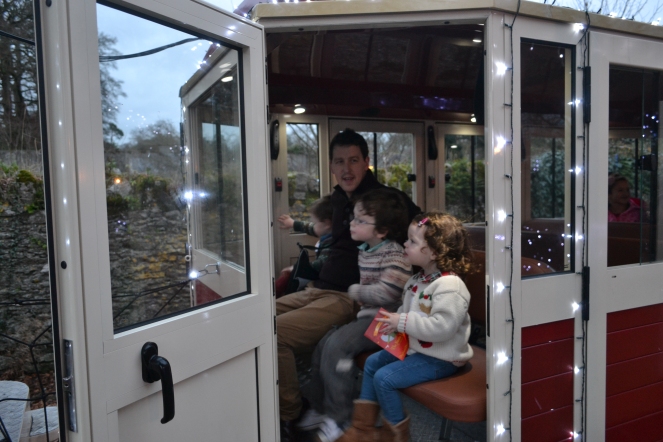 Santa was so great with each of them and much to my shock they all had a little chat with him, with L even bursting into a little rendition of ‘Christmas pudding’!

We really had the most wonderful stay at Mount Juliet, it was the perfect way to celebrate our 6 year wedding anniversary, and getting to see Santa in such a magical location was just the icing on the cake.

4 thoughts on “An anniversary, Santa visit and Christmas Eve to remember!”