That Sunday night was a game changer – life changer really. I, again, lost all control. My heart was racing, aching. My thoughts spiralling out of control as I thought about how we would have to rent a holiday home over in England for the summer – the consultant had said he didn’t know how long we would be over there for. It could be 1week, it could be 6, there was no way of knowing. There was just no way that I could leave the other 3 munchkins. I couldn’t bear the thought of Ben and Elijah going over tonight without me, yet I wasn’t really well enough to go by myself.

But I  can’t leave Elijah.

Then I NEED air. I need out of this room.

I can’t leave this room, what on earth are you talking about!

I’m going to be sick.

I need to go for a walk and process this.

I’m going for no walk! I’m not leaving his side!

Our wonderful minister arrived then, it must have been around 10pm. He came in – a voice of calm and reason. As he offered to move me into the manse, or the kids, or all of us, or to do whatever he could to help……..then the consultant appeared.

“You’re going to Dublin instead.”

Well, my goodness, it was all I could do, but to kiss that man! Dublin? Dublin, I can do! 2 hour drive. Now, that is do-able. God you are so good!

The consultant sat us down to explain what was wrong with Elijah’s heart. There were 3 areas of concern. He hoped that an operation on one part, would help another, and the 3rd problem was fairly common and treatable with medicine. When the transport team arrived, the consultant thanked Ben and I for our patience and grace, (let me tell you I felt like I had been neither patient nor graceful in the past week – a raving lunatic more like!) and then gave me a big hug.  There was something about that moment that was very special. It’s hard to describe. But at that point a huge peace came over me, I knew this consultant ‘got it’ and God whispered, “I’ve got this. I AM IN THIS. Forget London, I’m taking you to Dublin.”

As they prepared Elijah for travel, I could not stop the crying and the wretching. I was going to go home to J, S and L and Ben would go to Dublin with Elijah. I would join him the next day.

As they tucked Elijah in to the most awful wee incubator transport thing, (it looked like a glass coffin), the transport doctor said, “OK mum, give him a wee kiss goodbye.”

Well gosh. I had only got to hold his little finger up until this point – kiss him??? I didn’t think my legs would hold me. As I bent over to kiss his little forehead the surge of emotion was overwhelming. Oh, my boy.

Our minister had waited in the corridor for us to see if there was anything he could do, as we walked past him with Elijah I could tell he was invested in us, in this situation. God gave us him for this journey and we are so incredibly thankful. As he left us at around midnight that night, I knew we were being looked after.

And so off they went to Dublin. Less than a week since he was born, I was left with empty arms once more. With a deep ache in my heart. But with a promise – “I’ve got this.”

Dublin was…well, Dublin was stressful in many ways. My wound split open. It got infected.

Consultants decided there was no operation needed for Elijah’s heart, structurally his heart was fine. Initially we were delighted, but as things were further explained, and the surgeon said, “I wish I could operate to help your boy”, we realised it wasn’t the outcome we had thought. Who would ever imagine that they’d be wishing their child could have heart surgery?!

And so, after 3 days we were coming back up the motorway with Elijah…with a consultant in Dublin who, ” wished us well” and who, ” hoped we made it back to Belfast, you have a very sick little baby”.

Elijah had a wee B&B in NICU, before being transferred over to Clark Clinic the following day. The turn around was quite remarkable. It was as if God said, “Yip, OK Dublin, he is a vety sick little baby, but he’s my sick little baby and I have a plan. I have a purpose for him to fulfil.”

Our church had met for a special prayer time for Elijah and we firmly believe God answered those prayers. We know that consultant in Dublin did not expect Elijah to live another 12\24 hours. But here we were 24 hours later on Clark Clinic. And Elijah? Well, he was out getting his very first cuddle with me! 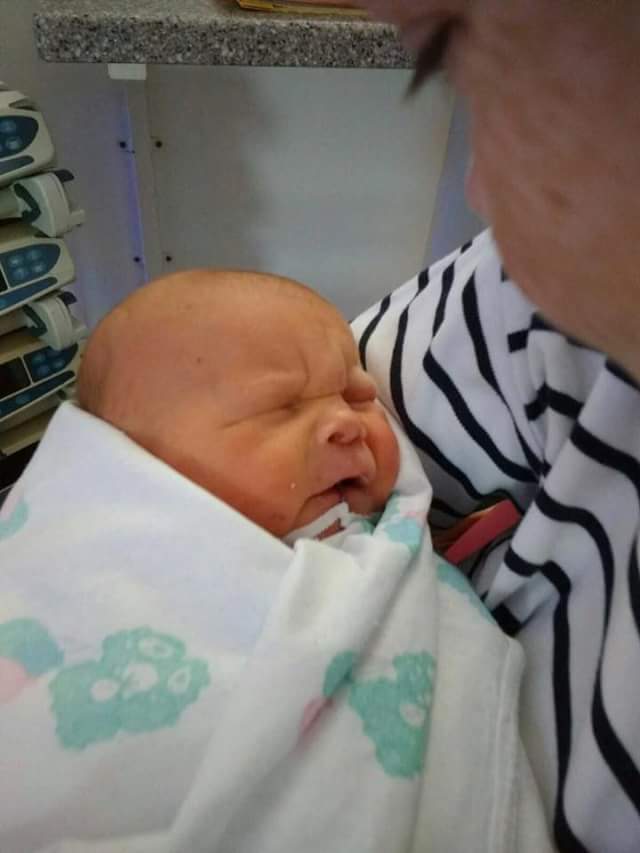